Although we are in the dampest and darkest time of the year, and this year’s event on the showground had to be cancelled, the Mirfield Show committee are already hard at work planning something splendid for the summer of 2021.

People on the committee, the “Mirfield Show family”, represent all ages and occupations, some new to the role and some more experienced.

Chris Ramsden joined the committee in 1995, shortly after the first show following its re-inception.

The current chairman, Jonathan Evans says, “Chris is always relied upon to tirelessly to provide his indispensable contribution to Mirfield Show, year after year.”

Chris has helped organise the show for 25 years, as a committee member, head of competitions, vice-chairman, chairman, and he is now the show’s honorary president.
Jonathan continues, “I am delighted to mark this significant 25-year milestone and present Chris with a token of the committee’s appreciation.”

The show secretary, Sylvia Ford, says “I am pleased to also present Mrs. Ramsden with a floral thank-you for her 25 years of support. We all need to have understanding partners!”

Social distancing was fully observed during the presentation held on the showground on Saturday, a couple of days ahead of the Show’s AGM – the first one to be held virtually. 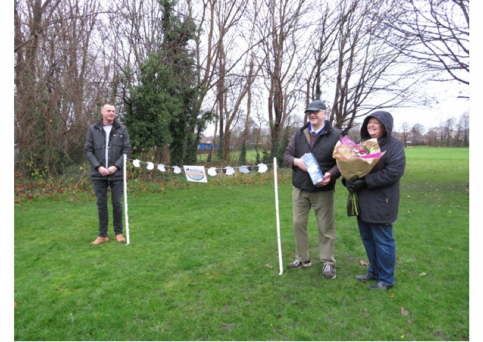 1944
The original Mirfield Show was founded during 1944 ‘to bring a little sunshine into the wartime lives of local people’.. The show reached its peak in the early 1960s and after several years of decline, it ceased to take place.

The Show has grown in size both in terms of visitors and attractions on offer. Despite the very occasional adverse weather conditions, 2020 was the first time that the Show has been cancelled.